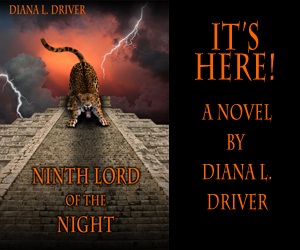 Ninth Lord of the Night - Trade Paperback
We're still in an age where readers enjoy holding a paper book in their hands so I'm pleased to have Ninth Lord of the Night out in trade paperback and selling for $9.99 on Amazon.com. The Kindle version of Ninth Lord of the Night is currently selling for $1.99, however that price will increase on April 1st to $4.99.
Speaking of pricing - there's a pricing war going on among Indie Authors with many dropping their novel prices down to 99 cents. They won't make much money, but they raising their sales numbers is more important to them than recouping expenses. At least, that's what I think their reasoning is. I set my prices according to the length of the work. Short stories are 99 cents. Novellas should be around $2.99 and novels - which take so very much time and effort to write - should be more than $1.99, but less than $6.99. And, personally, I think that the 99 cent range for novels simply cheapens the work effort. These are my thoughts only and the great thing about being an Indie Author is that each and every one of us is in control of our own pricing structure.
I've been pulling back this month - just as the Ingwaz rune predicted I would - to get Ninth Lord of the Night up in print and then finally I was able to get back to The Amber Stone, my work in progress. It's been so long since I worked on this manuscript that I spent a couple days rereading the material and I must say I'm happy with my work up to this point. Hopefully, this book will make its debut sometime this summer.
Right now, I'm researching Power Places and in particular Rollright Stones. The powers they are thought to possess are of peace, comfort and security as well as vibes of extreme negative energy. It's been reported that the ripples and vibrates in waves. It has also been reported that these stones house animal spirits and the forms of the animals can be seen upon occasion.
﻿
Posted by Diana at 5:33 AM

Love the cover art! This looks like a very exciting novel.

Actually, I have heard another possible reason for the .99 cent strategy. Some authors are trying to get an initial burst of sales going on the novels release, in hopes of both getting in reviews and getting market exposure. Of course, if that's their real strategy then I would expect them to raise their prices later. We'll just have to wait and see what they do.

Thank you Jacqueline! I think the cover artist captured the excitement of the story!

I know that's what some authors are thinking. Sell the book at a cheap price to get a low ranking hoping that they'll make it to the top 100 and get noticed.

We'll just have to see what happens.

What a great post! Diana, I'm so happy for you. You stuck to your guns and made Ninth Lord of the Night both available in ebook and print. (that cover is a winner!)

Jumping in on the ebook pricing thing--goodness. I know I have an ulcer from going from one end of the scale to the other trying to decide what to price "Tracking Perception". Then it dawned on me...we can change the price later. :-)

Cherri! Congratulations on your release!!