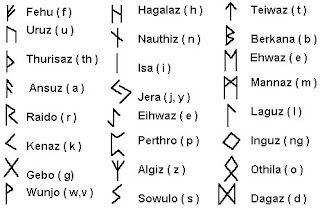 A couple of weeks ago my sister Jaimie sent me some books on Runology and I've been reading almost nonstop. This book, Northern Mysteries and Magick by Freya Aswynn, has really impressed me. It's a very positive and beautifully written book. Ms. Aswynn goes into the deeper meanings of the runes (and the various levels of meaning that each one represents) and does it in a way that's easy to understand.

Like many people, when I began my study of runes, I thought they were just an alphabetic divining tool, but they are much more than that. They encompass the whole esoteric belief system of the Northern Peoples before the age of Christianity. This belief system is as complicated as any other religion or philosophy - including the Hindu religion.

Runology is a fascinating study one that will have a prominent part in my next novel.
Posted by Diana at 7:30 AM 5 comments: