Time to Get Back to Work

Time is definitely flying! Won't be long until Amazon makes another deposit into my bank account. I'm so excited to see these monthly statements.

At the moment, I'm working on another short story that's in the same style as The End of the Tour. Then, there's the fantasy to finish, edit, and upload as well as a paranormal that I'm working on.

Being a writer requires a lot of self-discipline. There's no behind you cracking a whip and telling you to get off Facebook and get to work. There are times when I think that "Procrastination" is my middle name. But, as we all know, the work won't get done if you don't do it. So, I'll be disappearing from Facebook and my writer's loops and concentrating on new work that I hope will please my readers.

Labels: cozy mystery, Dame Agatha Christie, getting to work, kindle books, Ninth Lord of the Night, the end of the tour, the mayan civilization, trade paperback, writing and promotion

The above link goes to a newscast which is well worth watching. In this case, a deer and a female goose have bonded and the deer has taken on the protective role of the male goose. Geese mate for life, so obviously the male goose is now deceased.

Book Trailer - The Maya, People of the Maize 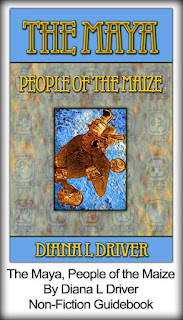 The Maya, People of the Maize a nonfiction companion book to the fast-paced suspense novel, Ninth Lord of the Night.
Posted by Diana at 7:27 AM 1 comment:

Eihwaz - my rune for April
Eihwaz is the 13th rune in the Futhark. and the translation of the word is yew, which represents the World Tree, Yggdrasill. Yggdrasill's branches reach up into the heavens and its roots reach deep into the lower worlds. It holds the nine worlds and it was from Yggdrasill that Odin hung for nine days and nine nights in order to receive knowledge.


"I know that I hung on a windy tree
nine long nights,
wounded with a spear, dedicated to Odin,
myself to myself,
on that tree of which no man knows
from where its roots run.
No bread did they give me nor a drink from a horn,
downwards I peered;
I took up the runes, screaming I took them,
then I fell back from there."

Eihwaz is a powerful rune. According to Freya Aswynn (Northern Mysteries and Magic) this rune can be used in "shamanic traveling" or in the killing of another's soul.

On a lighter and more positive note, its basic meaning is spiritual enlightenment, endurance, initiation, protection, and the motivation as well as the action needed to complete a goal. As I'm not into any kind of astral projection or travelling or stealing souls, I'm hoping that when I look back on the month of April I'll see that 1. I've used my time productively. 2. I've completed my writing goals. And, 3. I've continued on my path to learn and experience the deeper meanings of the runes.

Any accomplishments are dependent on a person's own will and desires. I look upon Eihwaz as a positive rune which is meant to inspire and encourage me.
Posted by Diana at 11:09 AM No comments: