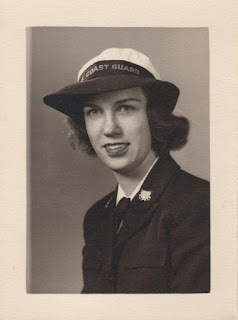 Hyla E. (Athey Forbragd) Watson
1924 - 2010
On Nov. 5th my mom lost her battle with breast cancer. She'd have been 86 at the end of the month. She was one of the most independent and free spirited people I've ever known as well as practically fearless. She was raised in an age where women didn't go to college or join the military and yet she did both. While in high school she earned a full scholarship to the College of Wooster
http://www.wooster.edu/    and when WWII broke out she enlisted in the Coast Guard. She was always very proud of both of these accomplishments. She felt that there was no greater gift than service to one's country.

She was also extremely proud of her heritage. It is because of her that I have so much information about my maternal lineage - including documents about ancestors who colonized America in the 1600's, ancestors who received land grants and settled Ohio after the Revolutionary War, and ancestors who fought for the Union during the Civil War.

Mom, like my grandmother, Elizabeth Athey, was a member of the Eastern Star. My grandfather, Clifton Athey, was a 32nd degree Mason. Mom was also a member of the Daughters of the American Revolution.
She raised three children as well as a grandson and was never one to shirk responsibility. She believed in education for those who truly wanted it, but didn't think that it should be forced on everyone.

Because of her, I developed a love for both books and history and I'll be forever grateful that she opened this world to me. My adult life has been greatly influenced by her ideas and social attitudes and I can never thank her enough for what she gave me.

She was raised in the Presbyterian church and had a strong relationship with Christ. She wasn't afraid of death, but actually looked forward to meeting her Lord. I know He met her at the Gates of Heaven and she's with Him now.

Diana,
What an incredible mentor you had as well as a mother. Her life, her struggles, her battles--ultimately, she won!
My heart-felt condolences to you, and extend to your family as well.

Diana, my condolences for the loss of your mother. This is a loss no one can fully understand until it happens to you. My mother has been gone many years, but I still think of calling her just to talk.Just the other day, I told my husband -- if my mother could just come to earth for two days. The loss becomes easier with time, but it is always with you.

I love your mother's picture...lovely.

Thanks, Betty!! I don't think I'll ever get used to Mom being gone.

Diana! I didn't know! I'm so sorry for your loss! Your mom was amazing. my deepest condolences on your loss!

Thanks, Pauline. She had a lot more courage than I have. That's for sure.